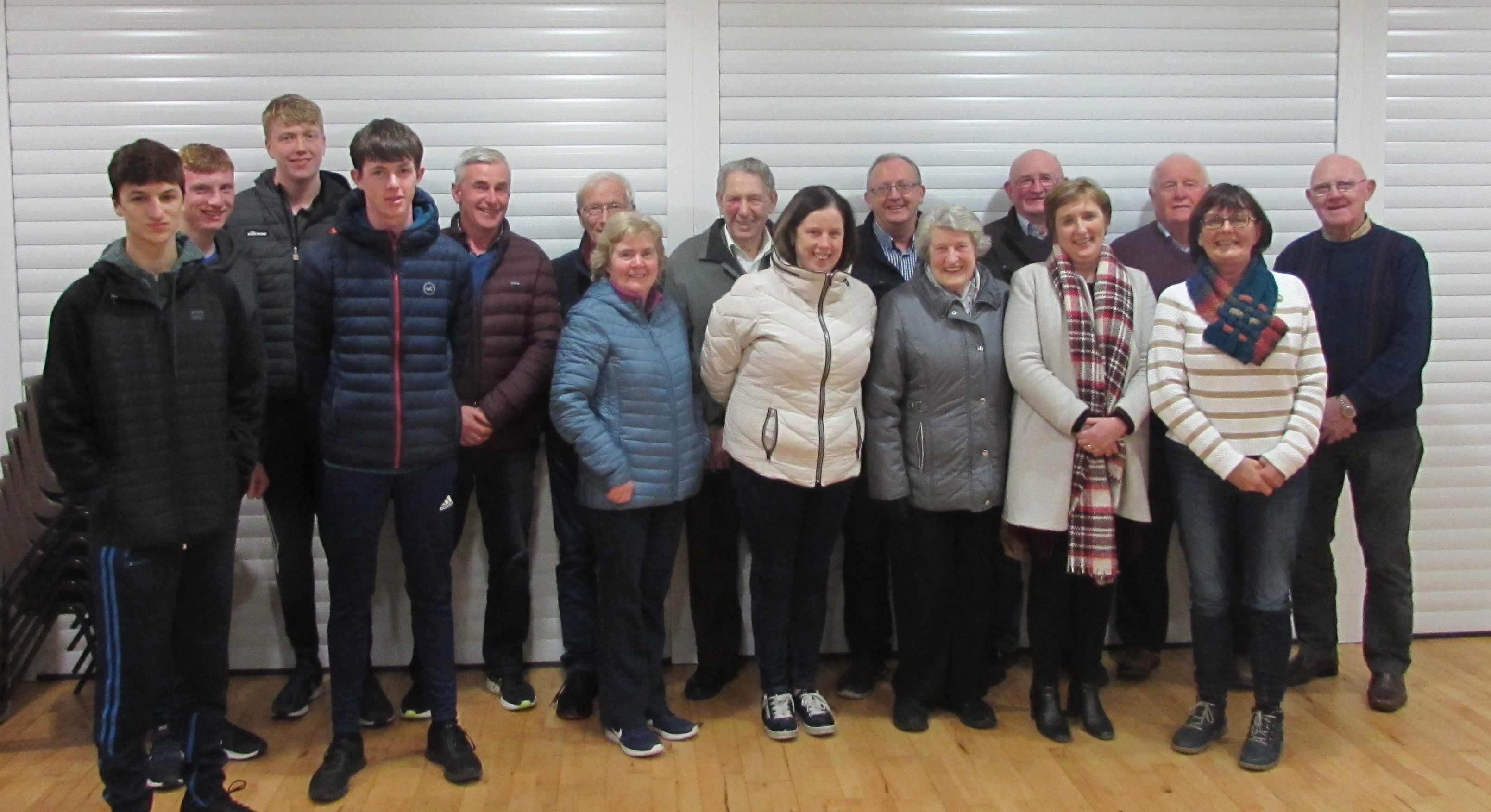 Pupils from St Coman’s Wood National School enjoying the indoor and outdoor classrooms in Kilteevan with their Bog and Nature Guide Eileen, on May 17th. 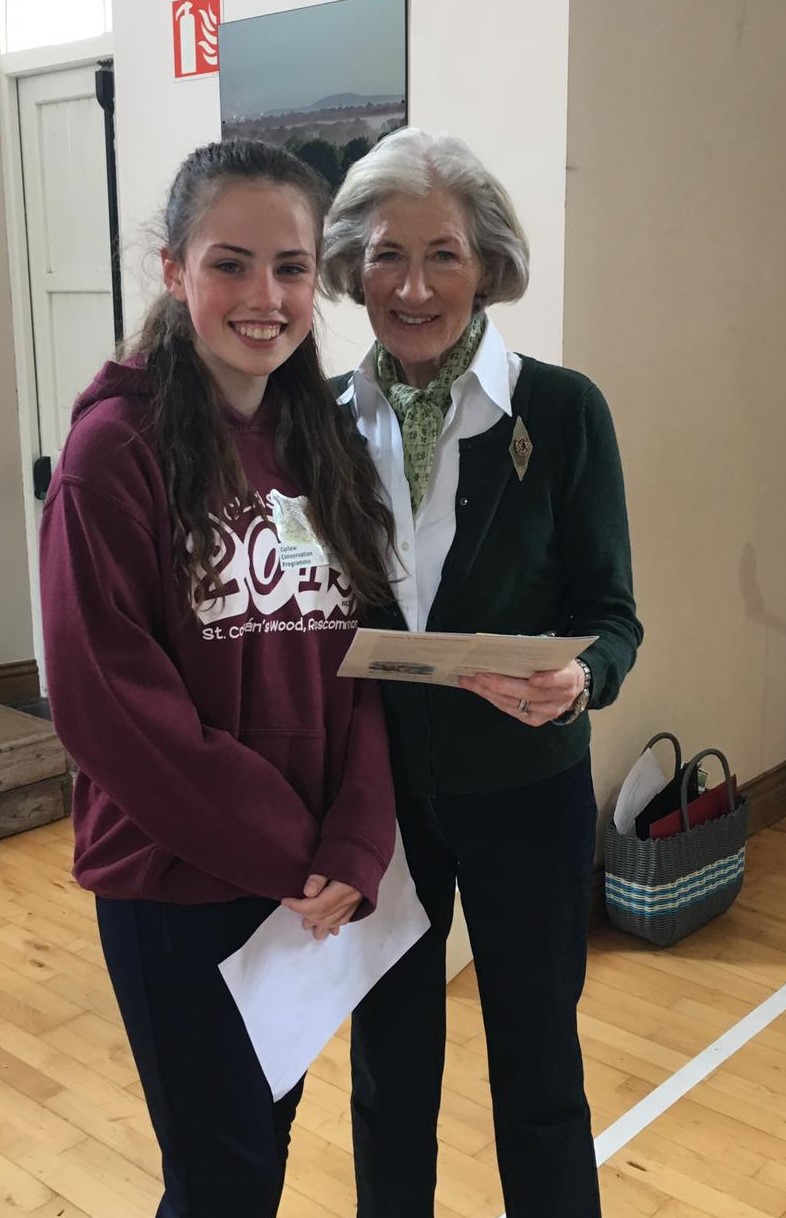 You can clearly see how much  the pupils enjoyed the wood carvings on the Loop by another local  very talented artist. 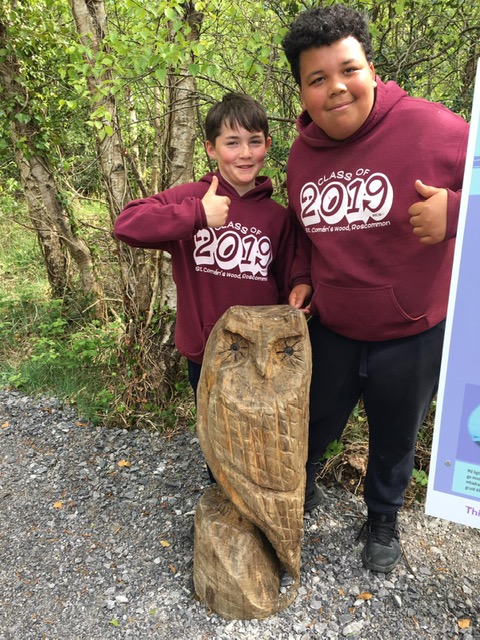 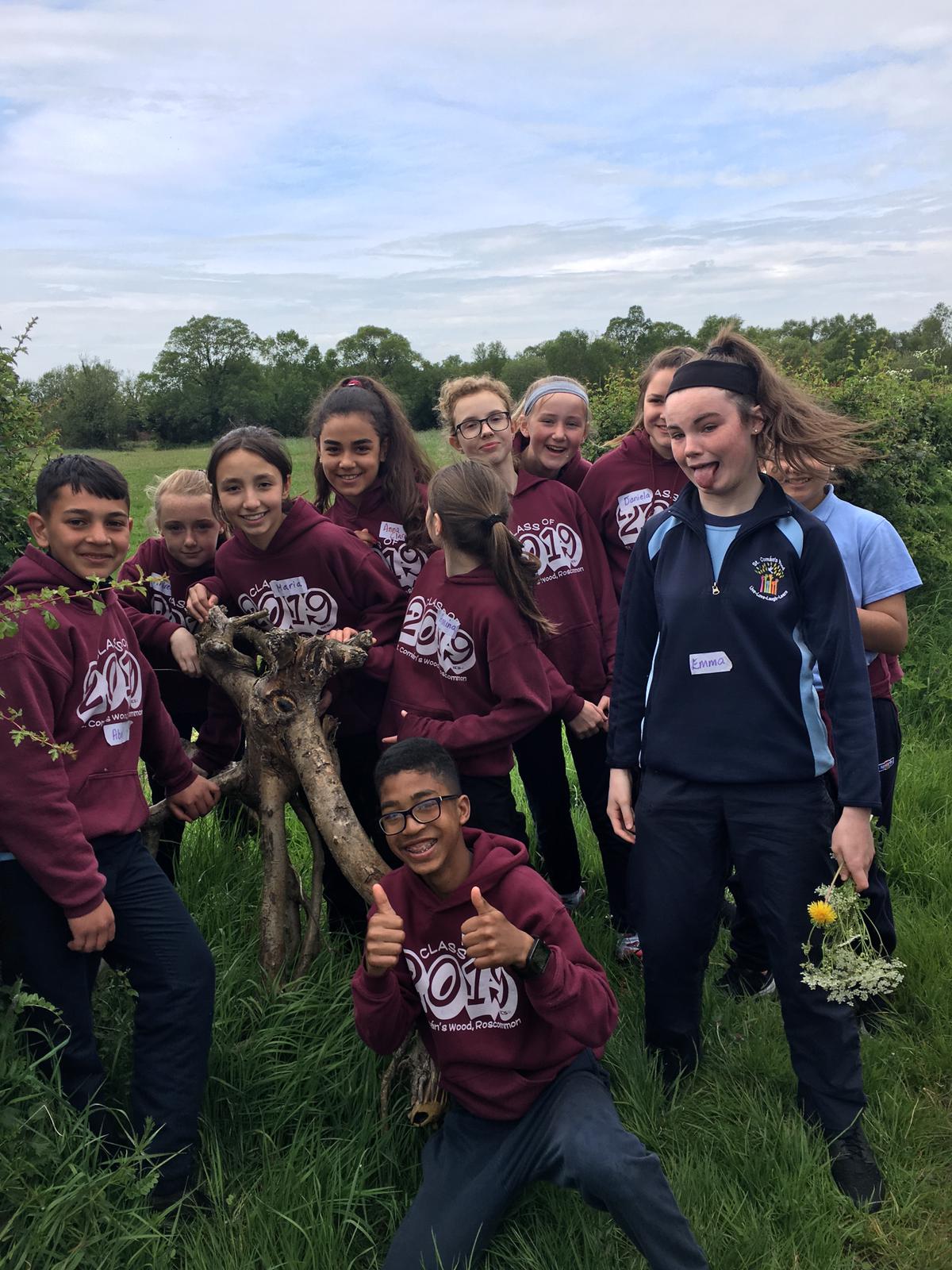 The meeting decided unanimously that Kilteevan should enter the Supervalue Tidy Towns competition for 2020.

Chairpersons KTT Award Winners for 2019 were as follows

The following is our 22 strong committee for 2020.

We also have the dedicated support of our Junior Tidy Towns team through Kilteevan National School.

The continued support of our numerous anonymous hard working volunteers in the community is very much appreciated also.

We look forward to another fun filled, hard working year and we are asking the entire community to for support for this vitally important environmental initiative.

Kilteevan Tidy Towns has earned a seven-point increase in the 2019 competition. Our adjudicator stated in our report “To attain the level of ranking in the competition that you have in less than 5 years, is also a major achievement.”

And there is more exciting news-The Cloonlarge Loop has won 2nd place in the Sustainable Development Award Section of the competition,

The group was presented with their award by Minister Heather Humphreys  at a gala celebration in Glaslough Co Monaghan ,Irelands Tidiest Town 2019. 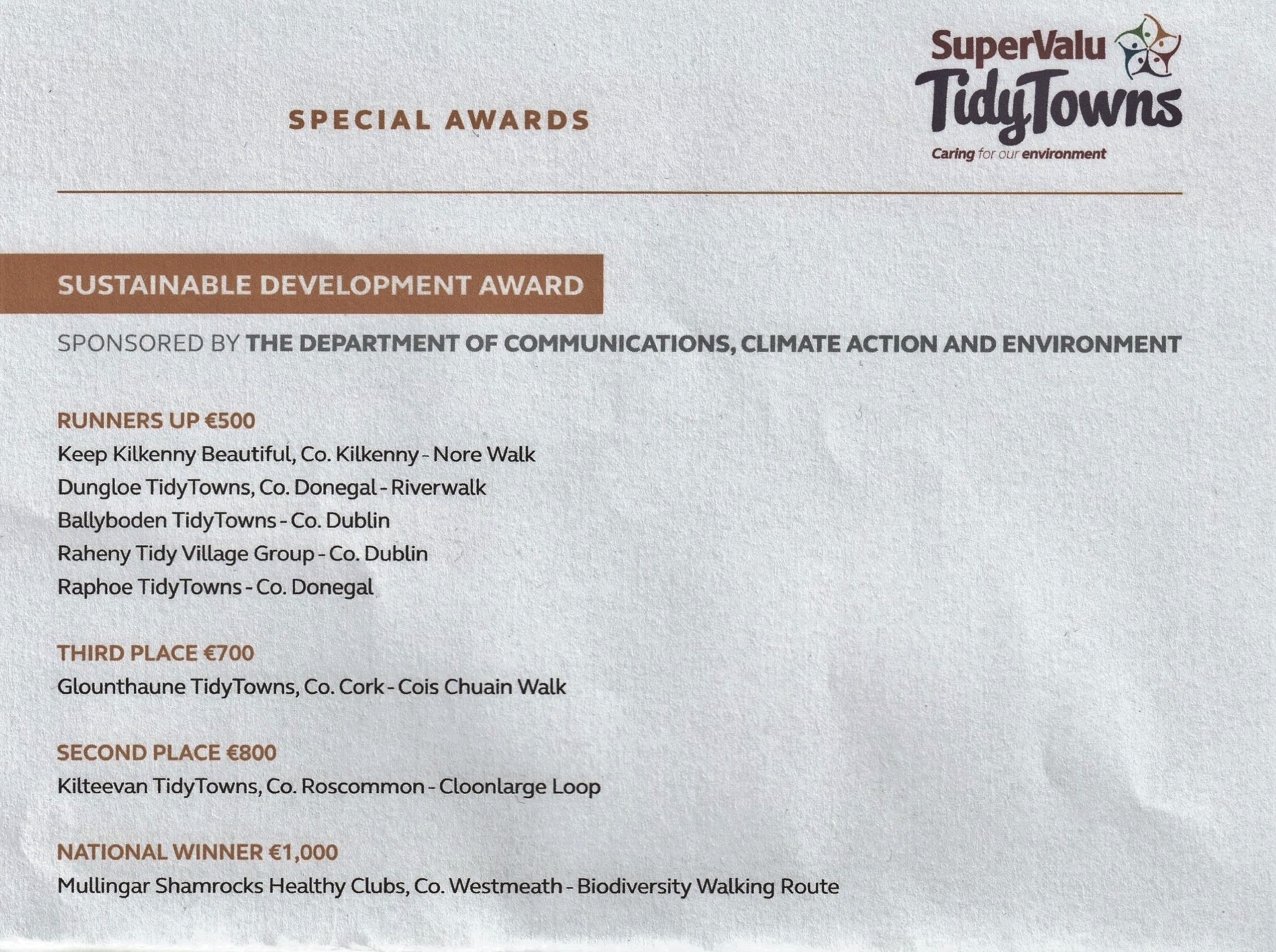 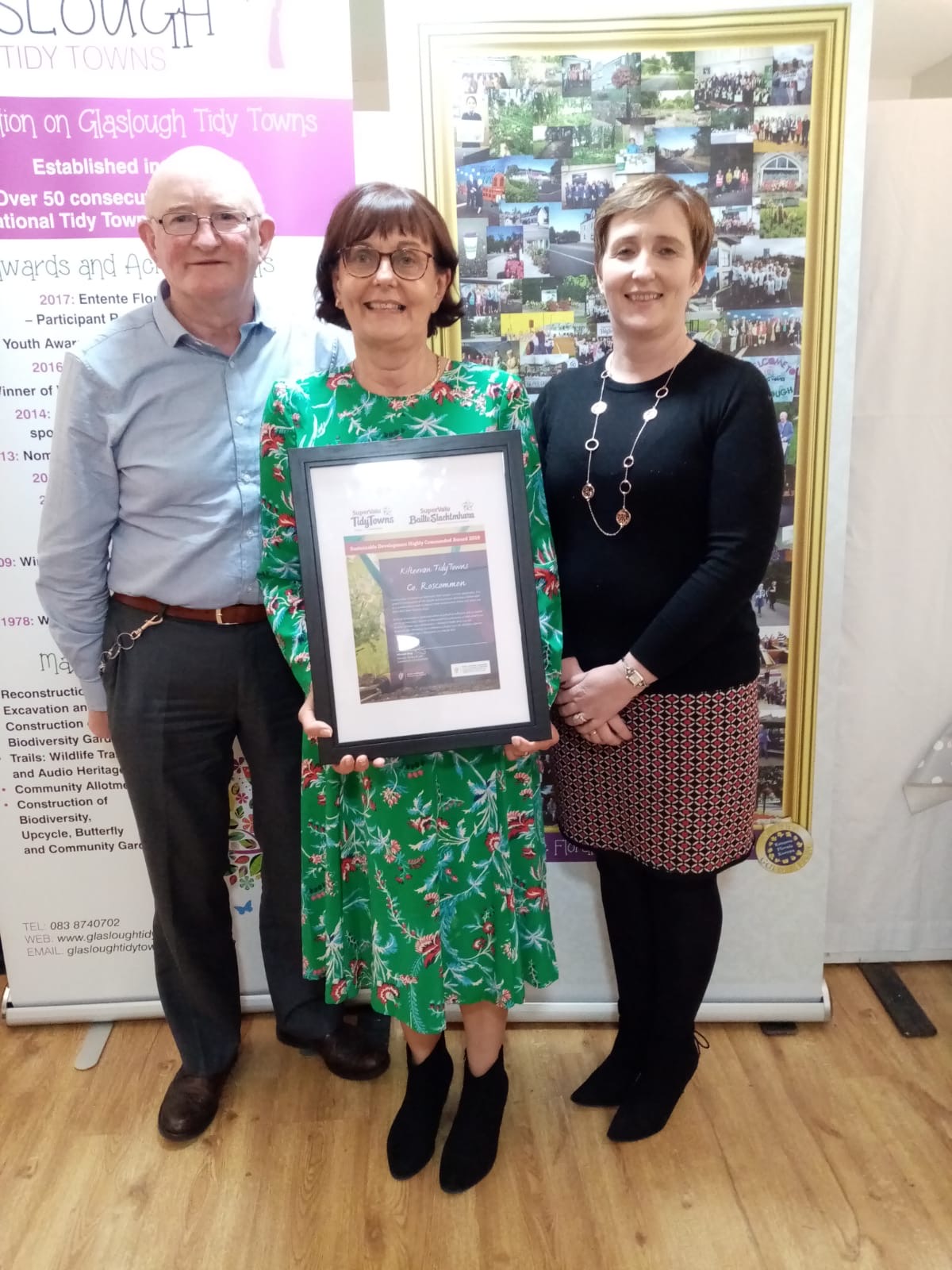 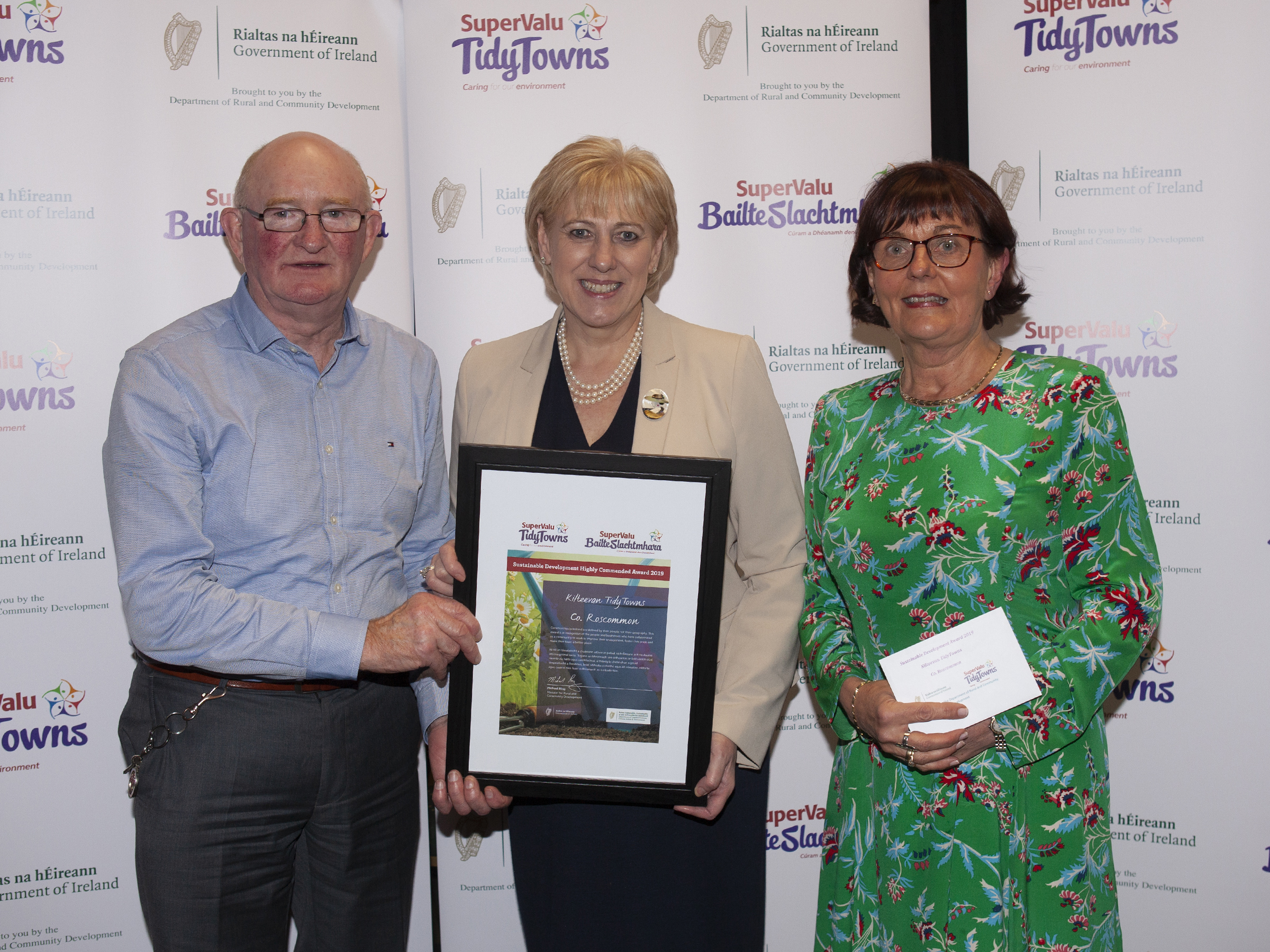 Congratulations to Kilteevan National School on raising their 5th Green Flag today for Biodiversity. Special guest Eanna Ní Lamhna was on hand to raise the flag before inspecting the school’s wonderful garden and grounds for Roscommon County Council’s “Pollinator Award”. 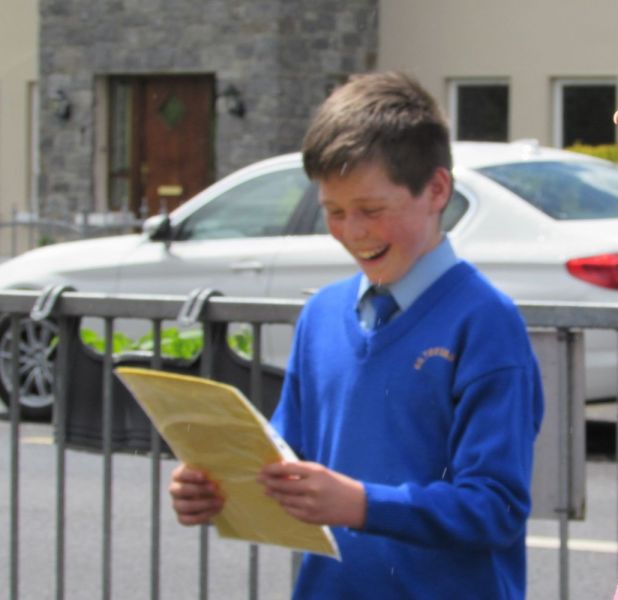 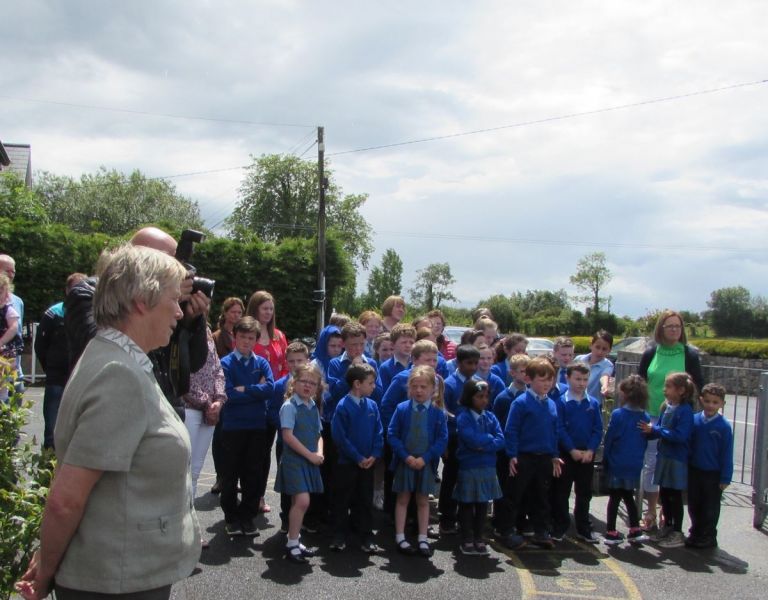 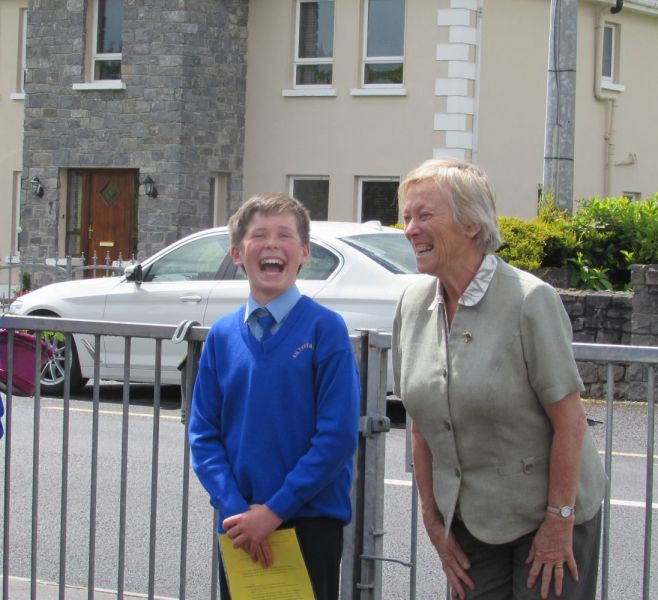 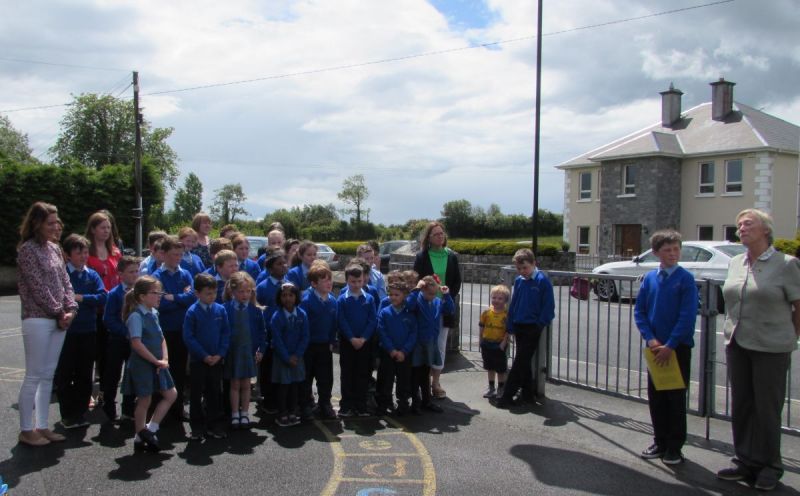 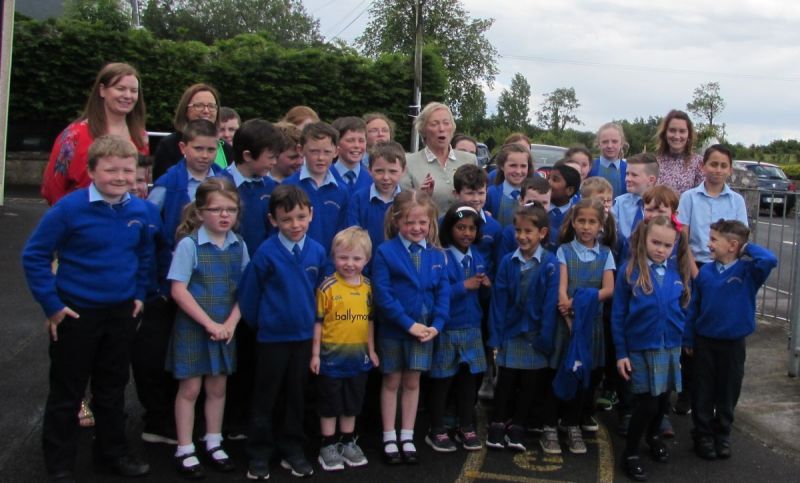 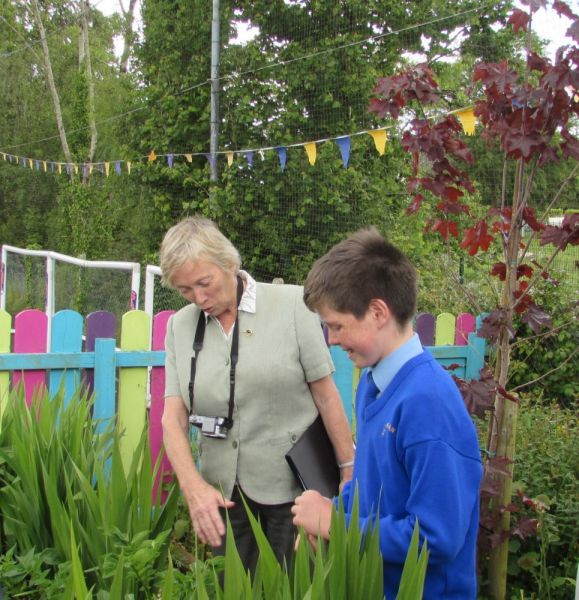 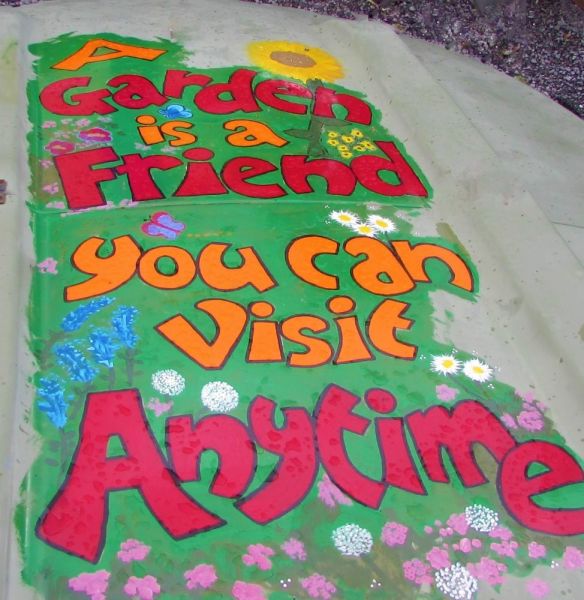 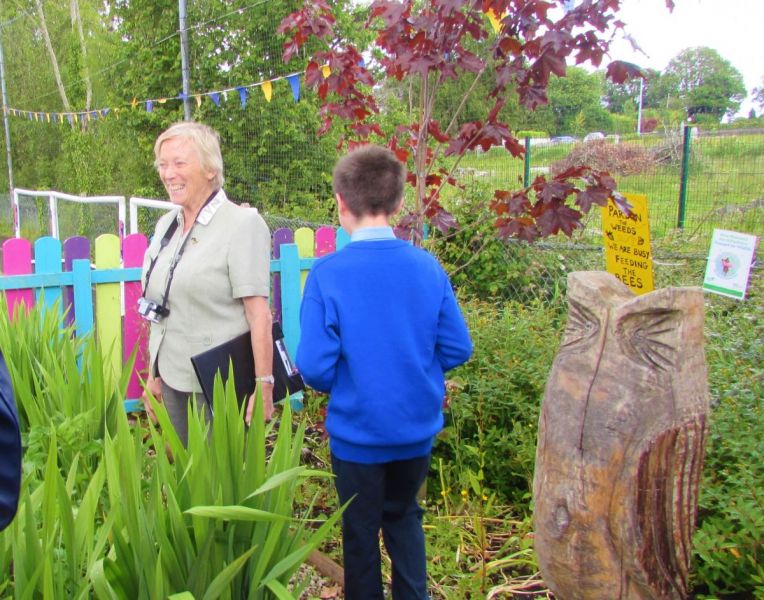 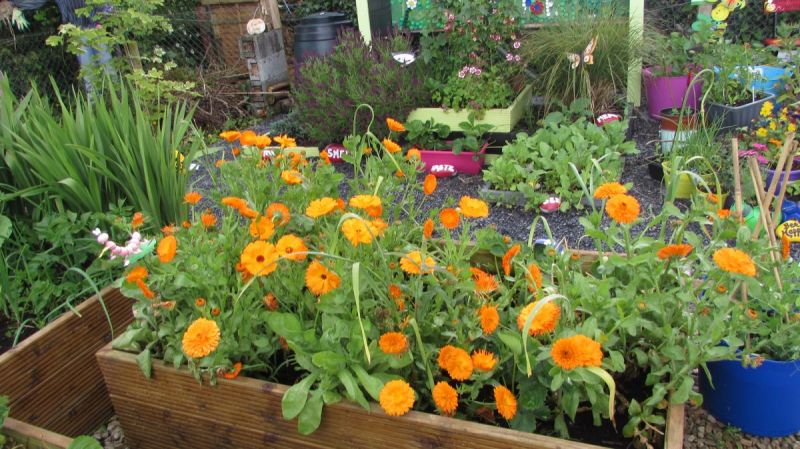 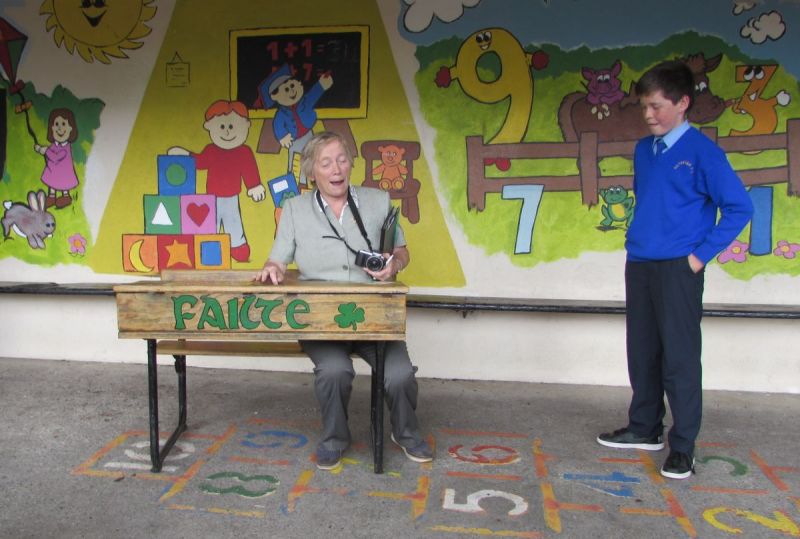 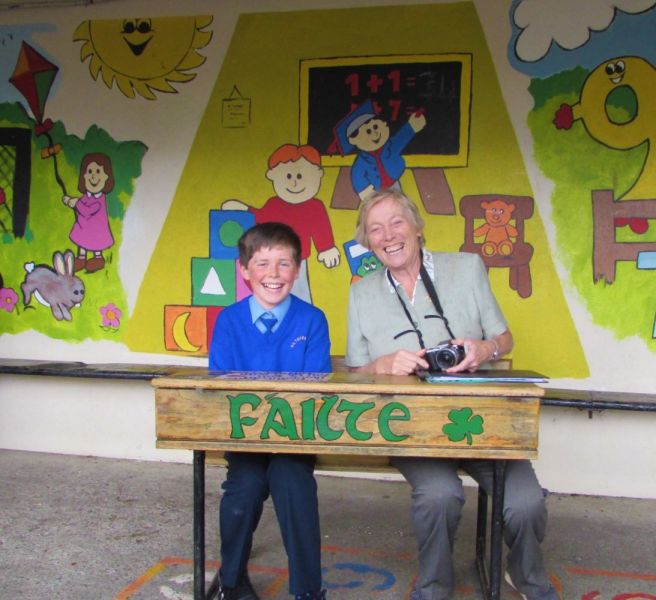 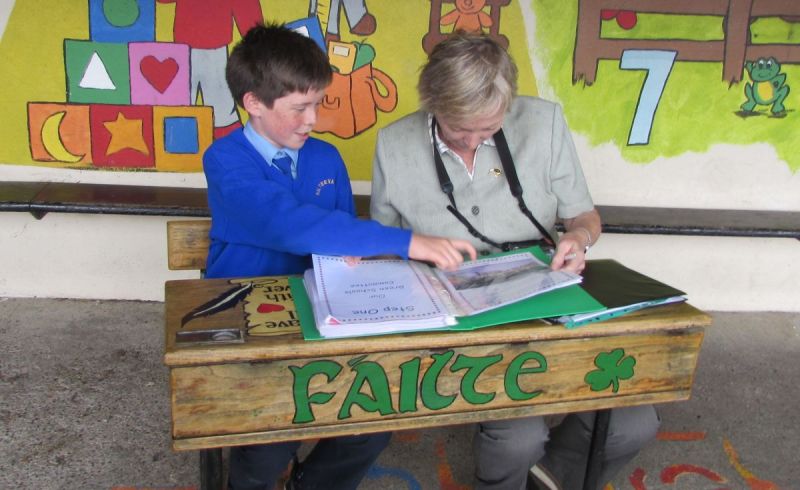 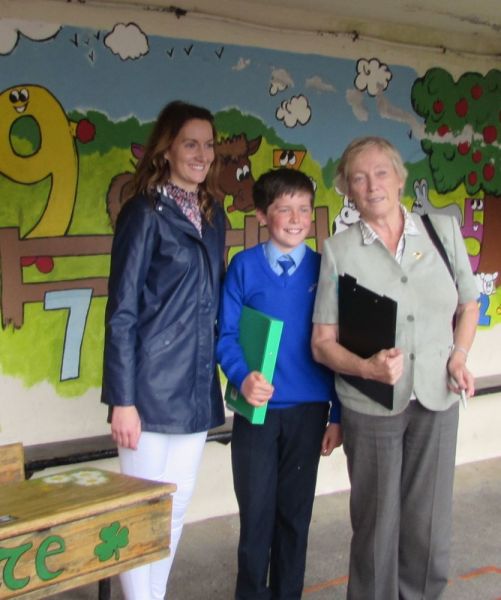 A large crowd of parents, grandparents, local residents, Cllr Orla Leyden, Suzanne Dempsey, Environmental Awareness Officer and Nollaig Feeney, Heritage Officer, Roscommon County Council witnessed the wonderful work the pupils and staff have done to complete what can only be described as a “little piece of heaven” in the centre of Kilteevan. Well done!

Please bring your own gloves. Social Distancing will apply.

We are appealing to all Tidy Towns members and everyone in the community, to come along and help us .

Members of Kilteevan Tidy Towns have recently undertaken Biodiversity Training provided by Roscommon LEADER Partnership Company.   Kilteevan Tidy Towns is currently developing a Biodiversity Plan with the support of Flynn Furney Environmental Consultants. As part of the planning consultation process, we are inviting people in the Kilteevan area, interested in biodiversity to complete and return the survey form below by July 10th 2019.

Thanks to an innovative programme by Roscommon Leader Partnership, Kilteevan has a new Biodiversity Action Plan.

Kilteevan Community Biodiversity Action Plan for 2019 – 2023 was presented to Kilteevan Tidy Towns at a special event in Gleeson's on Monday night.

The plan was drawn up following training, consultation and field trips with representatives of Kilteevan Tidy Towns over the Summer of 2019.  Nine members took part in this course. Kilteevan Tidy Towns was also presented with a certificate for participation the process.

The Action Plan was created by Billy Flynn, Deborah D'Arcy and Sean Meehan. This plan will be used to guide the work of Kilteevan Tidy Towns for the next three years.

The goal of Kilteevan Tidy Towns is to protect our biodiversity for the benefit of future generations through a series of targeted strategies and actions.

Kilteevan Tidy Towns would like to express a sincere  thanks to Denise Mc Donnell LEADER, and to Billy, Deborah and Sean. 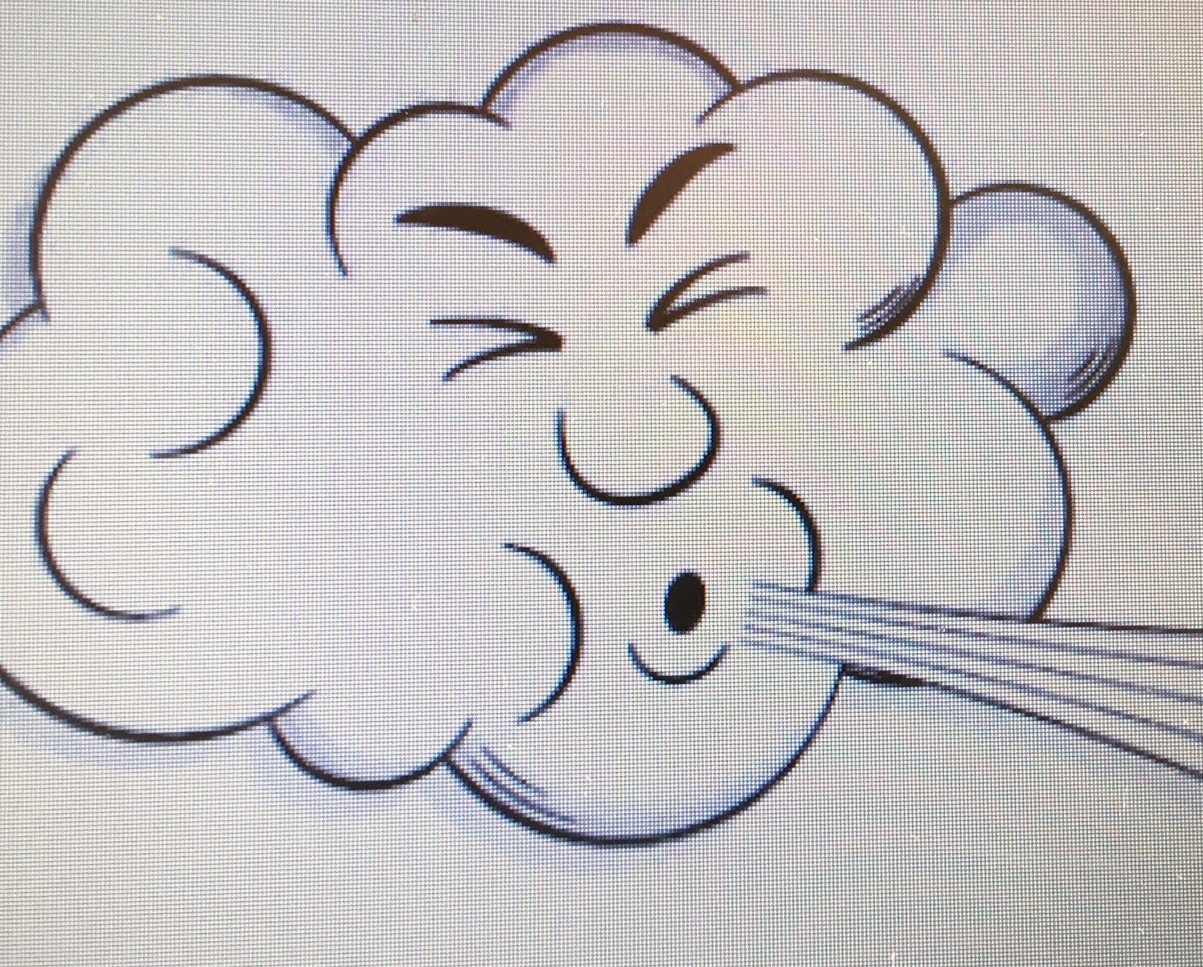 Please note, that due to the inclement weather ,the event on Sunday 16th Re-imagining Roscommon has been postponed. We look forward to rescheduling this event soon again. Watch this space.