The first reference to the Mapothers (sometimes Maypowder) in Ireland is found in 1588 to Richard Mapother Sheriff, of Roscommon.

This was during the reign of Queen Elizabeth 1. By the early 1600’s the Mapothers were granted land in Co. Roscommon and they established their main Residence here in Kilteevan. They intermarried with the Croftons, Nugents, Kellys, and Taylors of Swords, Co. Dublin. The family’s reputation has been heralded as that of a kindly landlord regime. Master Tom and his sisters Harriet and Mary were directly involved with the local community. They contributed financial support each year to the Kilteevan Catholic School. Samuel Lewis in “A Topographical Dictionary of Ireland”, 1837, states that Mrs. Mapother contributed £5 annually to one of the two private schools in the locality. The site for the first ‘formal’ school was given by John E. Mapother and the Mapothers were always trustees of the schools. They were also associated with the school in Cloonmore. The late Canon Kilmartin (a native of the parish) spoke of the “extraordinary kindness of the Mapothers to the people of Kilteevan when history demanded otherwise”.

All of Mapother’s tenants who had their holdings adjacent to the bank had turbary rights. The turf bank was the property of the tenant and they did not have to pay rent on it. (M.MS. 1506, p506) If it was a bad year and there was no turf saved Tom Mapother would never see his tenants short of fuel and would give them access to trees (M.MS.1506, p507). Wood (larch) was also given for boat making. (M.MS. 1507, p.7)

A bonfire was held on St. Johns Eve (June 23rd) in Kilteevan, just off the road, at the back entrance to the Mapother Estate. A large crowd of people gathered from miles around with plenty of music and dance into the early morning. Seven or eight loads of turf were brought to it. Everyone contributed some turf. Tom Mapother’s servant and horses would go to the bog and cart the turf to the site. A barrel of coals was brought from the nearest house to light the bonfire. Thomas and the two ladies (Harriet and Mary) always attended the bonfire. (M.MS. 1506, p417-418)

In addition to the latter, when a grave was being filled in the tradition at the time was to fill in to about 1 foot above ground level. Then it had to be ‘sodded’. The sods for the grave were always taken from another field. Thomas Mapother did not object to sods being taken from his land. About sixteen sods were needed and it was custom to cut three extra and these were left on the wall of the graveyard. (M.MS. 1506, p482-483) On St. Patricks Day the local children (often up to thirty) would go down to Kilteevan house after second mass. Miss Mary and Harriet would give each child a ‘badge’ – they would cut out a round piece of cardboard and criss cross it with different coloured ribbons (M.MS. 1506, p327).

Harriet Mapother died in 1907. Thomas Austin Patrick Mapother (Master Tom) lived in Kilteevan House until his death in 1919. Kilteevan house and estate became the property of Dillon Edward Mapother who lived in Louisville, Kentucky, USA. At the request of Thomas, prior to his death, his sister Mary was allowed to live in Kilteevan house until her death in 1932 aged 96 years. Dillon Edward Mapother died in 1933, whereupon his wife sold the estate and Kilteevan house to the Irish Land Commission. The sale was a protracted matter and not completed until the late 1930‘s, leading to the house falling into disrepair. Locals recall attending dances in the ballroom of Kilteevan House when it was in the ownership of the Land Commission prior to its demolition. The estate was broken up and the lands sold in 1942. Professor Edward Dillon Mapother, who was born in 1835, was an eminent Dublin surgeon, dermatologist, and President of the Royal College of Surgeons. He died in London in 1908. His son Dr. Edward, a noted London psychiatrist, died in 1940. To this day some Mapothers still live in Dublin but it is the Mapothers of Kilteevan that will always be remembered for their generosity and commitment to their local community.

As the Irish branch of the Mapother family had no issue, inheritance rights of the Roscommon estate was likely to revert to the American branch of the family. This may explain why Thomas O Mara changed his name to Thomas Mapother Cruise 1 though evidence is incomplete. In 1907, Thomas (aged 35) married Anna Stewart Bateman. The couple had two boys, Paul and Thomas Cruise Mapother II, who was born in 1908.

Tom Cruise Mapother IV, or Tom Cruise born in Louisville, KY in 1962 is a descendant of this line of Mapothers. A well know Hollywood star, Tom Cruise has featured in a long line of successful Hollywood films including A Few Good Men, Mission Impossible, The Fourth of July, Rainman, and many others. Dillon Henry Mapother’s son Dillon Edward, who was born in Louisville in 1862 inherited the Mapother estate on the death of Thomas Mapother Kilteevan in 1919. Prior to his death Thomas has requested that his sister Mary be allowed to remain in Kilteevan House until her death. Mary died in 1932. In 1933, Dillon Edward Maypother died and his wife inherited Kilteevan House and estate. The estate was sold to the Irish Land Commission by Dillion Edward’s family following protracted efforts to successfully establish their rights of inheritance to the property The Land Commission subsequently demolished Kilteevan House and divided the estate. 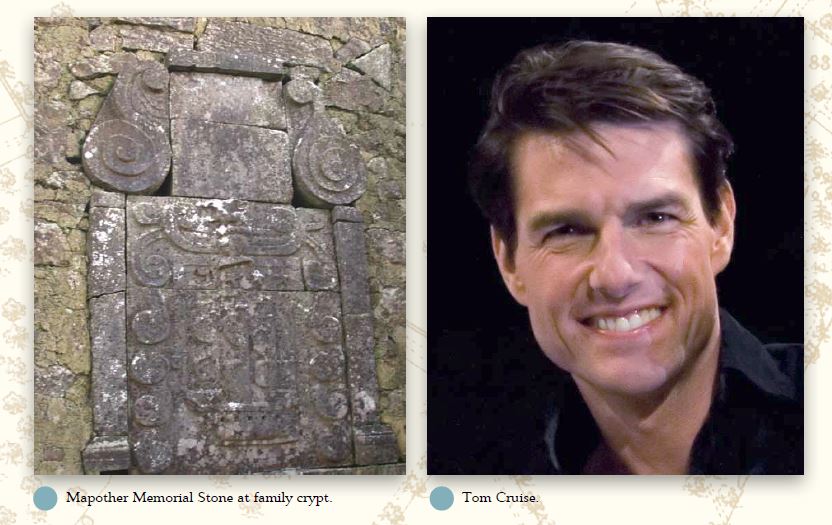 Ryan, H. A. (1997), Kilteevan: a look at a School and its Parish: Kilteevan. Kilteevan School Board of Management.