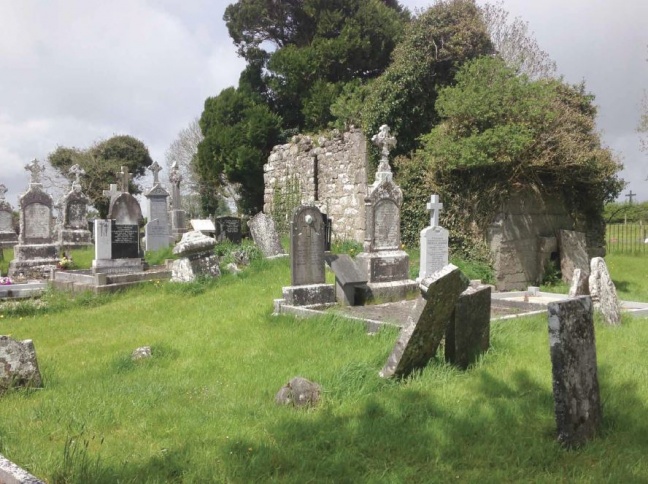 The medieval church ruin at Cloontogher has been dated to the 12th or 13th century but the site itself was probably an earlier Christian foundation.

The church has been associated in local memory with St Bridget and St Kevin. The name Cloontogher can translate as the meadow of the togher or causeway. This is most likely the translation for this locality as evidence of a togher has been found in a nearby townland.

The church, aligned roughly east-west, measures 6.35m by 11.60 internally. The northern wall and the eastern gable are well intact but much of the southern and western walls are missing. Three windows remain, with the eastern window being the most elaborate. The carved east window was described by Leask (1943) as “interesting and beautiful and a good example of the ingenuity of late 15th or early 16th century Irish mason-craft”.

During the clean-up of the site in 1989 many dressed and carved stones from the church were found.Window heads, sills, jamb stones, mouldings and lintels were recovered. A simple stone cross, the shaft of which is broken was also found. Its type is difficult to date, but it may be as early as the 10th century. A number of graves are marked with field stones which bear no inscription or carving. A few graves are also marked with holed stones. These are probably naturally occurring but could hint at a pre-Christian origin. There are however, no rituals or traditions associated with the stones at this site.

The area surrounding the church, which is enclosed by a roughly circular wall, has been used for continuous burial down through the years. The Mapother burial crypt is attached to the eastern end of the church. The oldest decipherable inscription of 1711 is on the wall memorial to the Mapother family in the church interior. The oldest one within the graveyard itself is 1718 (Coner).

The adjoining section of graveyard was opened in 1950. The grave of an Irish US Army veteran, Patrick A. Garvey, can be found here. Donal Brennan, from Clooncraff, (Kilteevan), former Manager of Aer Lingus in Europe, is also interred here.

Four Mapother memorials, a table tomb, an altar tomb, a recumbent marble memorial and a wall memorial are located in the interior of the church within the area enclosed by railings. There is also a headstone to the family at the eastern end of the crypt. The burial crypt measures approximately 3.8m by 3.9m with the side walls an average height of 1.6m approximately.

The eastern gable wall is difficult to measure due to ivy growth but is in the region of 2.1m high. In general the structure is in a ruinous state as vegetation roots have penetrated its fabric and the ivy has obscured much of its features. It was brick-lined with an outer wall of limestone. A section of wall at the eastern gable was replaced in concrete by local council workers, probably in the 1960s, as the crypt had been vandalised. Local lore claims that the coffins within the crypt were lead-lined and the lead was being stolen for resale.

In the 1990s the local graveyard committee carried out some emergency repair work to the northern side of the crypt as a section of the wall had fallen and the inner brickwork was exposed. The wall was rebuilt in dry stone but this has recently collapsed leaving a large section of brickwork uncovered. 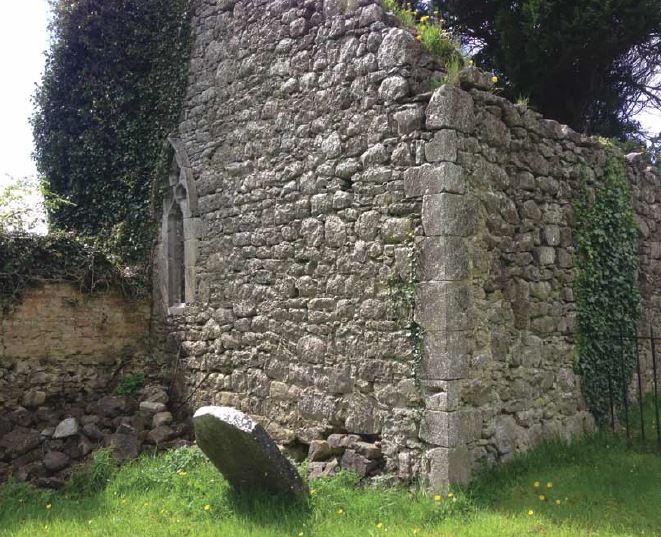