The building at the heart of the parish at its central crossroads has played a prominent role in the life of the parish since the early nineteenth century.

It has had many uses since its construction. Firstly as a place of worship, then as a business premises and in more recent years Kilteevan Community Centre. Following an extensive restoration project the Centre was officially opened by President of Ireland, Mary McAleese on 4th February 2011.Within this building is the magnificent ceiling, hand painted by the Brentini brothers in 1904.

EARLY HISTORY AS A CHURCH

Tradition claims that the first church on this site was a thatched church, built under the patronage of the Mapother family, which was used during the week as a school room. Two holy water fonts bearing the date 1782 may have belonged to this early church. Also a worked limestone slab with an incised cross and the date 1793 was recovered during the recent refurbishment works. According to Fr Finan (the first resident curate) the building as we know it today was constructed in two phases. The older part of the church (northern end facing the grotto) was built about 1819 by Dr McDermott, Adm. Roscommon almost on the site of the old thatched church and was also used as a school room. The nave, the central part of the church where the decorated ceiling is, was built about 1842.

In 1904 the church was provided with heating and the ceiling was hand-painted by two Italian artists. On the 15th December 1906 the Blessed Sacrament began to be reserved here. On the same day Fr. John Finan a native of Castlerea, Co. Roscommon, became resident in the parish where he served until 20 July 1922. The other priests who served here were Fr. James MacGowan 1922-1930, Fr. Thomas Mahon 1930-1939, Fr. Patrick Keaney 1939-1945, Fr. J.A. Gannon 1945-1955 and Fr. Thomas Kilroy 1955-1969. It is thought that the church, like the church in Roscommon, was dedicated to the Sacred Heart. The original statue in the grotto was also of the Sacred Heart and processions were held on his feast day. It remained in use as a place of worship

until 1963. It was with much sadness that the people of Kilteevan received the news that the church had been condemned by the Diocesan Architect Mr B. Rhatigan, Sligo. The decision was to replace it with a new church, St. Joseph’s Church was blessed and dedicated on Sunday 25th August 1963. The last baptism was celebrated in the old church on 24th August 1963 by Rev Thomas Kilroy.

THE ARCHITECTURE OF THE CHURCH

The church was T-shaped in plan with the sacristy (a later extension) and two doors to the north and the main entrance porch to the south. The church bell was housed in the bellcote on the southern gable which is flanked by stone pinnacles. The walls were roughcast-rendered with limestone quoins. The pointed-arched windows also have limestone surrounds and once held beautiful stained glass. The door openings are also pointed arched with limestone surrounds. The door and window openings in the northern elevation have hood mouldings. 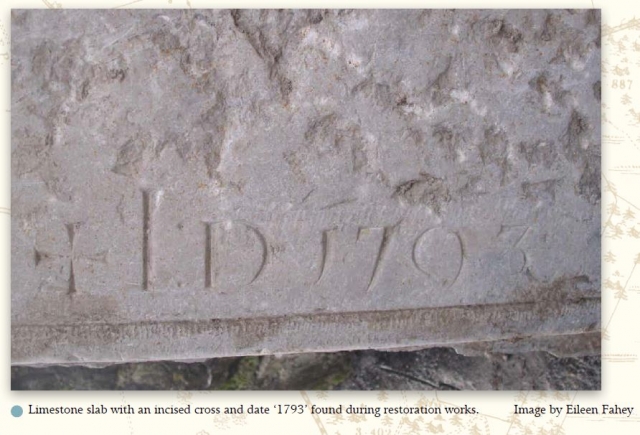